The First Entrepreneurial Liberty Camps Have Just Been Held In Ethiopia!

The group in Kocha

I am thrilled to share with you about our first ever entrepreneurial Liberty English camps in Ethopia, organized by TEAM in collaboration with LLI, Ethiopian SFL, and Bastiat Society of Ethiopia from 12-17 December 2013. The camp hosted hundreds of students in two different cities of Ethiopia from more than 10 universities.

Our program combined lectures, presentations, videos, as well as SFL charter leader video messages from abroad to Ethiopian students to help students acquire the necessary tools to protect their freedoms and spread the ideas of liberty more effectively amongst their friends and neighbors.
These camps are our second big achievement we have towards the advancement of the functioning free market principles and liberty ideals in Ethiopia, follow our first liberty conference, which was organized by TEAM and Atlas Network in August 2013.
In the programs, LLI co-founder and acclaimed management consultant Andy Eyschen trained and discussed with students about free market economics, voluntary exchange, the fundamental principles and institutions necessary to support a free enterprise, and the system that can uphold and protect the rest.
In addition, the executive director of the Language of Liberty Institute, Glenn Cripe also raised the ideas and lives of pro-liberty figures including Ayn Rand, FA Hayek, Frederick Bastiat, and others.
The director of Bastiat Society in Ethiopia, an official chapter of Bastiat Society also attended the camp in Addis Ababa and made a presentation on the works of Frederic Bastiat, the mission, goals, and objectives of the Bastiat Society to student participants who attended the camp in Addis Ababa. 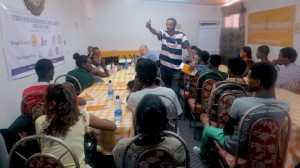 Moreover, I had the chance to partake in the lectures where I introduced the works of TEAM along with the mission of Atlas Network and Students for Liberty. I also spoke on what causes wealth to grow and societies to progress when given economic freedom in comparison to systems of central planning, which create economic burdens that perpetuate poverty.

In the weeklong programs, students who attended the camp programs were awarded with a certificate of participation, and prizes were awarded to the students who were most active during our question and answer sessions. Not only were students able to leave the camp with their newly acquired knowledge, but they also received complimentary copies of the CD of the Ideas for a Free Society, and books of the Economics of Freedom and Why Liberty? both edited by Dr. Tom Palmer, the executive vice president for international programs of the Atlas Network’s and a senior fellow of the Cato Institute.
In conclusion, I would like to thank you the backing and support of ISIL, NFS, Atlas Network, and other individuals and local supporters as your incredible generosity is what keeps us going and helped hundreds of students to understand the world in which we live today. Thank you very much again for all your support to keep liberty alive