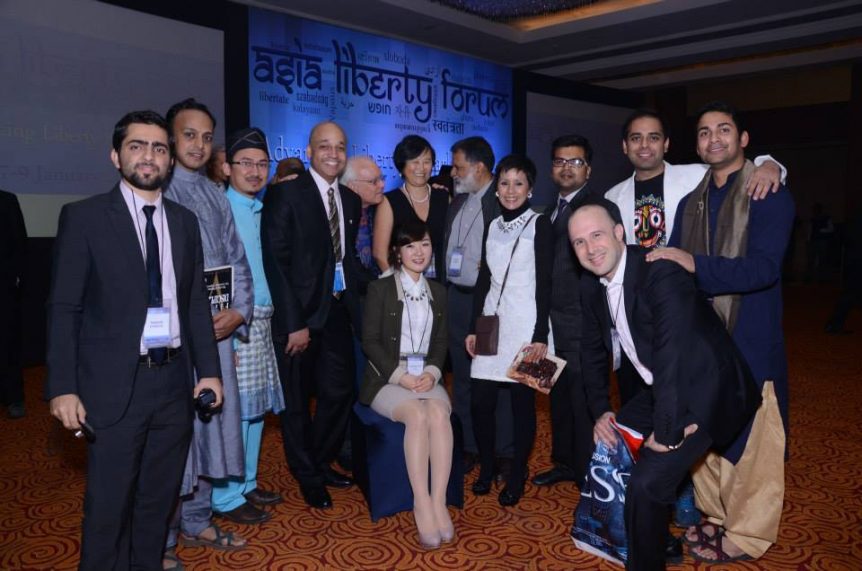 How 2 Days in India Made Our Year

Starting off 2014 with a bang, 200 freedom fighters from 41 countries gathered in New Delhi, India for the second annual Asia Liberty Forum (ALF).
“Hundreds came, from countries like Afghanistan and Bhutan to Tajikistan, Thailand and Vietnam. Those with decades of experience met others who had just joined the movement. Some initiatives wanted to promote the studies of classical liberalism while others engaged in practical initiatives. Yet all shared the desire to prove that individual freedom and free markets in open societies provide the best policy solutions,” observed Rainer Heufers, who spoke at our Lausanne conference last year. We were pleased to join in on the excitement as ISIL President, Ken Schoolland, was invited to speak at the event on the panel From Aid to Enterprise.
“The Asia Liberty Forum was a magnificent congregation of free market activists from around the world. It was impressive to make the contacts and to learn what projects are being undertaken,” reported Pres. Schoolland about the event, “Among the most impressive is the India Property Rights Project of the Liberty Institute (LI) and Action Research in Community Health (ARCH). And I was stunned by the extensive ground work performed by the India Institute on ‘The Private School Revolution in Bihar.'”
He was not alone in being impressed by the event, Prof. Cris Lingle, who also spoke at last year’s ISIL conference, “I have to say that it might have been one of the most interesting and exciting such events I have ever attended anywhere. It is quite clear that Asia is fertile terrain for spreading the ideas and ideals of supporting human liberty.”
ISIL has been hosting World Conferences for a number of years, while at the start there were very few such events for international libertarians, today the number of providers has grown greatly, and understandably, so has the quality of these events. As always, libertarian conferences continue to play an essential role in advancing liberty initiatives. Upon which Pres. Schoolland elaborates, “I have come to agree with Barun Mitra, founder of LI, that conferences must be the springboard to practical action in making liberty happen. For my wife, Li, and for me, this one was one of the finest springboards ever–and a terrific opportunity to let all of Asia know what ISIL is accomplishing as well!” As he spread awareness of our latest activities, as well as our ownupcoming conference in Albania.
Also springing from this event is a 2014 Shanghai Austrian Economic Summit——a sequel to the highly successful conference organised by Li Schoolland together with ISIL in 2012——which with contacts and excitement gained at the conference has now been launched. You can find out more information about it here. Li was on a panel for Women in Liberty at ALF, telling her story of growing up during Mao’s Cultural Revolution and the camps and conferences she has been organising in recent years to disseminate ideas of liberty in her home country of China.
While mainstream news sources are becoming more aware of a libertarian presence in the US, as seen with the article The Tide is Rising for American Libertarians published in the Financial Times this month, “had the Financial Times attended the Asian Liberty Forum,” commented Heufers, they “would have been amazed by the multitude of initiatives in so many Asian countries”.
We hope that you gain courage by learning of the number of initiatives in Asia, and throughout the world, to advance the cause for liberty, and use this as inspiration as you work to defend liberty in your own country. Click here to learn more about the liberty movement in Asia.