The seventh annual International Students For Liberty Conference was held over this past weekend in Washington DC. Starting with just 100 students in 2008, this year’s event drew nearly 1,500, with sizeable numbers from Europe, Brazil and Africa.
Numerous movement luminaries addressed either general sessions or breakout sessions. There was also a taping of the John Stossel TV show for Fox Business Channel. Several organizations held major evening social events.

Three major SFL awards were given out. Event of the Year went to “Restart Balkans” by Students For Liberty Greece; Group of the Year went to Students for Liberty CZ of Masaryk University (Czech Republic); and Student of the Year was awarded to Isack Danford of Tanzanian SFL who recruited 1,100 members in just one year!
We found the SFL students to be clean-cut, well-dressed, articulate and friendly. They are the cream of today’s college campuses, and the growth of the organization is astounding. Of course, the government is helping a lot with recruiting. 🙂 There were also many brand-new organizations at the conference.
This is the first year ISIL ran an exhibit table, in conjunction with Language of Liberty Institute, which runs most of the Liberty Camps with substantial sponsorship by ISIL. We had a world map showing the locations of our conferences and Liberty Camps on the wall, and three big colorful poster about ISIL activities that were designed by ISIL Director of Development Kenli Schoolland, first displayed at last year’s ISIL conference in Lausanne.

From Dr. Jim Lark, Secretary of the ISIL Board of Directors 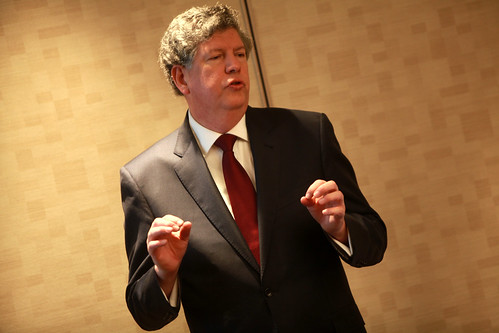 I had the honor of addressing the conference on Friday (Feb. 14); I gave an address entitled “Challenges to Liberty: Substantive Criticisms and Questions Concerning the Libertarian Perspective” to a standing-room only audience. I am delighted to note that my address was very well received. (I also note with great pride that evidently I am one of only three speakers who have given invited addresses at all seven international Students For Liberty conferences; the other two are David Boaz and Tom Palmer).
As with the previous six conferences, I was impressed with virtually every aspect of the event. The conference ran smoothly, featured many interested speeches, and brought together libertarian students and “friends of the family” from throughout the world. It appears the ISFLC is now regarded as a “must attend” event for most liberty-oriented organizations in the U.S.
By virtue of my service as a member of the SFL Board of Advisors, I participated in a briefing on Saturday, Feb. 15 concerning both SFL’s progress during the past year and plans for the near future. The organization is preparing to embark on a major effort to increase its funding base in order to expand its outreach activities within the U.S., and to maintain contact with its alumni. The organization also anticipates continued explosive growth in Europe, South America, and Africa.