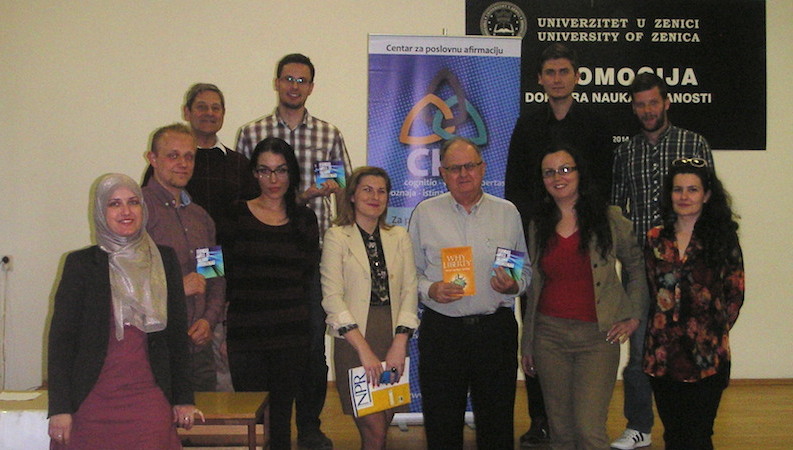 Why is there no sex in Bosnian government departments?

Language of Liberty Institute (LLI) returned to Bosnia for our first events of 2014. Bosnia was the location of our last event for 2013 in December, but while we had a Liberty Seminar in the capital Sarajevo then, this time we held seminars in two country towns, Tuzla and Zenica, the location of our two Bosnian partners in spreading liberty, MULTI in Tuzla, run by Admir Čavalić, and the Center for the Advancement of Free Enterprise (CAFE) in Zenica, run by Edo Omerčević.
Incidentally, a few weeks ago, Tuzla was the location of the first major uprising against the government of Bosnia. Whilst overshadowed by the event in the Ukraine, it was significant for Bosnia as the anger, frustration and dissatisfaction with the government spilled over into the streets of several cities in Bosnia, including the capital. This could be a “wakeup-call” for the government, although it is still too early to judge.

The trigger for the Tuzla uprising (which became the trigger for the demonstrations that followed) was the loss of jobs by employees of former state enterprises that had been privatized and given to friends and relatives of the ruling elite. With no experience or competence to run the businesses, the new owners stripped the companies of their assets (for some quick and easy cash) and then let the companies fail and go into bankruptcy, causing the loss of jobs and the anger of the affected employees who have now joined the ever-growing ranks of unemployed in Bosnia.
The Tuzla demonstration was followed by protests in other parts of Bosnia, including Zenica and the capital, to display the general anger and dissatisfaction of the population with a government marked by nepotism, cronyism, corruption and incompetence.
A joke making the rounds in Bosnia, and even the world, is typical of the perception people have of their government.
Question: “Why is there no sex in Bosnian government departments?”
Answer: “Because incest is illegal in Bosnia”.
Having friends and (especially) relatives in high places is a key factor for getting good jobs in Bosnia. The obvious nepotism and corruption that inevitably follow generate a deep sense of frustration, anger, and hopelessness. Educated young people dream of leaving their country at the earliest opportunity and seeking their fortunes elsewhere. Unless you are well-connected in Bosnia, your skills, experience and knowledge will not get the recognition they deserve, which results in a “brain-drain” of the country’s most talented young people.
Against this background, our seminars focused on the proper role of government, on the benefits of a truly free enterprise system, and on a civil society that gets things done without government “help”, interference and control. Bosnia is one of the worst countries in the world to start and run a business and there is absolutely no incentive to be productive, to be innovative, or to try and use one’s own efforts to achieve a better life.
While there are undoubtedly exceptions to this generally bleak picture, the feedback we got from our students about their country was indeed bleak and very pessimistic. We had lively discussions about the proper role of government, about the fact that most demonstrators in the streets of Bosnia are demanding more government help, more jobs, more benefits, higher salaries, etc. They believe their government to be merely corrupt and incompetent, not realizing that the very power they have given to their rulers is the source of the corruption and incompetence.
Together with our local partners CAFE and MULTI, LLI focuses on educating our seminar attendees, all young people of university age, on the concepts of freedom and individual responsibility, on free markets and entrepreneurship, on reducing the influence, power and control of governments and giving people the chance to improve their lives the way they see fit. Too many Bosnians are looking to the government to be an “engine for good” rather than seeing government as a “necessary evil” whose power to do evil is restricted as much as possible.
We have no doubt that we will return to Bosnia again soon! In the meantime, we wish our local partners every success in their difficult task to change attitudes, to educate, to lead by example, and to show the way toward a better future for Bosnia. We encourage our readers to consider how they can support and help our friends in Bosnia in their struggle for freedom, and we especially appreciate the financial support from ISIL that made these seminars possible.