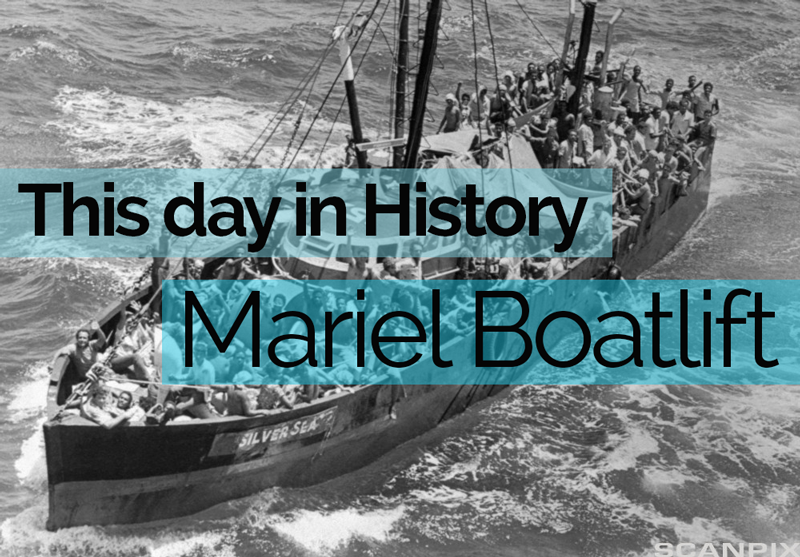 The Mariel Boatlift: Voting With Boats

It is said that freedom always wins when people are allowed to vote with their feet…they move from locations of high tyranny to places of relative freedom—always in very great numbers.
34 years ago today, on April 20, 1980, Fidel Castro announced that any Cubans who wanted to leave could do so without punishment from the port town of Mariel.
In the clearest possible expression of their hatred of Castro’s rule, Cubans voted by boat. More than a hundred thousand took to rickety, makeshift vessels in what came to be known as the Mariel Boatlift.
Americans in Miami grabbed whatever boats they could find to reunite with friends and relatives across the channel. Braving hurricane winds, exposure at sea, pirates and sharks, desperate refugees crowded aboard anything that floated, regardless of seaworthiness, because freedom seemed so worth it.
At first the U.S. government of Jimmy Carter lived up to the ideals of the Statute of Liberty and embraced these refugees. The U.S. Coast Guard didn’t actually go to the port of Mariel to provide safe transportation for those eager to leave, but the U.S. armed services did a commendable job of rescuing many of those who became stranded on the high seas.
After all, the U.S. had sanctioned Cuba for 20 years, condemning Castro’s regime for the brutality of his communist dictatorship, for the forced economic squalor and repression of free speech and civil liberties. The U.S. had even attempted to overthrow or assassinate Castro. So why wouldn’t Americans at least welcome those who tried to flee Cuba?
Then the mood turned against refugees when it was rumored that Castro’s trick was to release “undesirables” from prisons and mental hospitals, sending them all to America. Jimmy Carter, in an election year, then agreed with Castro that they would both put an end to this unruly, chaotic mass movement and close the doors once again.
Castro won the collaboration of Carter to help keep Cubans at home in poverty and repression. Previously, refugees only had to worry about eluding Castro’s guards. Now they had to elude Carter’s guards as well. The guards on both sides of the border were determined to deny his freedom. It didn’t matter which side of the border the guard stood, the effect was the same, whether to keep him in or to send him back.
Yet, wasn’t it a good thing to protect America from escaped prisoners and the mentally unfit? Aside from the idea that all of Cuba was a prison at the time, what of those “criminals” who were in Castro’s jails? Wouldn’t they have done harm to America?
Consider what it took to be a criminal in Castro’s jails. One became an economic criminal by trying to produce or sell food without a license. One became a criminal deviant by being homosexual. One became a social outcast by being a Jehovah’s Witness or a Seventh Day Adventist.
Less than 2% of those detained under suspicion of criminal history were found to have a violent record. That should be easy enough to handle without condemning all desperate refugees to return to a life under Castro’s boot. Most of the people in communist prisons were not violent criminals, but had their individual rights trampled by the state.
Suppose the same attitude toward refugees had taken hold in Berlin when the Iron Curtain fell in 1989. If German Chancellor Helmut Kohl had feared it was too risky to allow East German prisoners to be released into Germany, then the Berlin Wall would have been refortified and it might well be standing today.
That is why we still have a refortified Communist Cuban regime. Because Americans and their political leaders became afraid of refugees and failed to embrace the collapse of the Caribbean Iron Curtain—a seawall that is maintained by mortar from both America and Cuba.