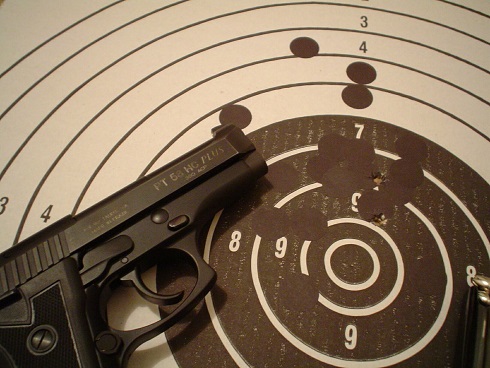 The State of Firearm Freedom in Brazil

Walking down the street here in Brazil it quickly becomes apparent political campaigns are in full swing. Signs displaying the slick smiles and hollow rhetoric of (would-be) politicians abound, and the same rhetoric emanates from megaphones on small vans driving around town. But besides the more high-profile presidential elections there will also be state elections injecting more specific issues into the public debate.
Recently one such sign immediately caught my eye. With an image of a firearm and the text “contra o desarmamento” (against disarmament) it was impossible to miss. A firm believer in the right to self-defense, I felt compelled to find out more about a gun debate I was unaware even existed here. Having found out that gun laws are very much like the ones in my native country of the Netherlands I figured the issue would not even be on the table. Fortunately I was wrong.
In 2003 the Brazilian government passed a law dramatically restricting gun sales while all but outlawing their carrying by civilians. Termed the Disarmament Statute it forces potential legal gun owners to go through a litany of paperwork, checks, and tests just to own a firearm and keep it at home. A carry permit can still be denied if it authorities determine “genuine reason” was not provided. Yet in terms of bringing down crime rates the Statute has been a dismal failure; a decade after its adoption Brazil has 50 percent more gun deaths than the United States despite having110 million fewer citizens.
Undeterred, Brasilia put forth another initiative to further clamp down on civilian gun ownership in 2005. Luckily this time lawmakers at least had the decency to call a referendum – the first of its kind in the world. The proposed law was meant to entirely ban the sale of firearms and ammunition to anyone except security firms, sports clubs, and the government. Much to the surprise and chagrin of its proponents, however, it was met with a resounding no. Based on early polls ostensibly indicating overwhelming support for the ban they were expecting a win, but equal time on television in the final weeks prior to the referendum resulted in more than 60 percent of voters opposing it.
Now it seems the debate has come full circle and gun rights advocates are gaining the upper hand. It will be interesting to see how this plays out during the campaigns and subsequent elections early October. If fought well this battle may go a long way toward winning the victim disarmament war. Then again, leave it to politicians to talk a good game about something on the campaign trail and then suffer from acute memory loss after taking office. Perhaps a grassroots campaign focused on educating people about natural rights would help keep their feet to the fire.
Given the corrupt reputation and consequent distrust of the police it goes without saying that Brazilians don’t feel protected by uniformed gunmen. Rather than further the case for gun control, the 2005 referendum might well have backfired. Anti self-defense groups were forced to begrudgingly admit that the other side had successfully linked owning a firearm with freedom, using images of Tiananmen Square and the Berlin Wall. Furthermore, current restrictions are (predictably) leading to much different outcomes than predicted. Residents of São Paulo and Rio de Janeiro can attest to that.