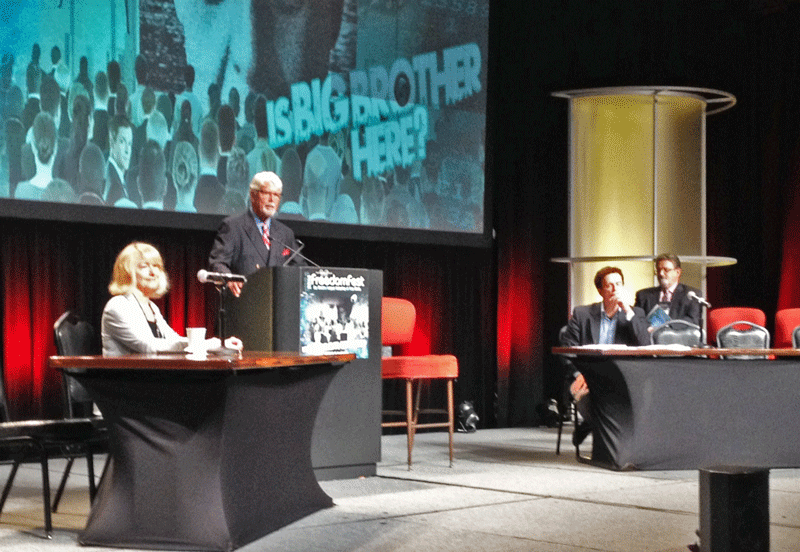 Mark Skousen’s Freedom Fest is truly the most spectacular gathering of free minds in the world. Spectacular? Of course! Barnum and Bailey had exotic animals, clowns, and acrobats to promote…how hard can that be? But Mark turns intellectuals and academics into a scintillating 3-ring circus with a gala film awards showcase, fiery debates, testy courtroom trials, glorious musical theater, and glitzy Vegas dancing.

Jan Kuban speaking on “Tigers and Outsiders: Avoiding the Polish Way to Tyranny”

Mary Ruwart’s debate with a university labor professor over the minimum wage was shown nation-wide on C-Span and had a very good impact. Appearing on the big stage, she smashed her opponent who came across as a disconnected academic completely in the clouds. Mary politely cut him down to size and the audience was completely ours.

On another forum during concurrent sessions, ISIL filled the house with these respective topics: Doug Casey, “Don’t Cry for Me: Living Dangerously in Argentina”; Mary Ruwart “Do Cry for Me: Living with Big Brother in the Former Land of the Free”. Doug advised people of great ways to find places to live free. Mary’s speech focused on the tragic impact of the FDA. She was the only one on such a hot topic with Obamacare looming on the political horizon.

Li Zhao Schoolland made her second appearance and a very positive impact on the grand stage with Steve Forbes, Barbara Kolm, Leon Louw, and Mark Klugmann with roughly 2000 in attendance. She had many people come to her throughout the conference telling her that what she was doing was excellent and they wanted to help.

Li had a couple media interviews. One woman hugged her, gave her a $50 check for her Shanghai Austrian Economic Summit. Another called Li the “dangerous weapon of mass destruction.” Best of all, with more national exposure, Li was questioned by John Stossel during his show.

Finally, I appeared with Ken Elzinga, Richard Ebeling, and Sean Flynn to a full house in a concurrent session entitled: “The World’s Best Economic Professors.”

Throughout, Jim Elwood, Glenn Cripe, and Sarah Bales operated a booth in the exhibit hall where we made good reconnections with numerous luminaries, donors and active organizations such as ACTON, Atlas, Heritage, FEE, Advocates, etc. Lots of hand shaking and talk. They know what we’re doing and are interested. Just not sure how it will materialize in attendance or support for what we’re doing.

In addition, we have a lot of new material for our website in the form of speeches and recorded interviews which will be posted soon. You can view the full program here.