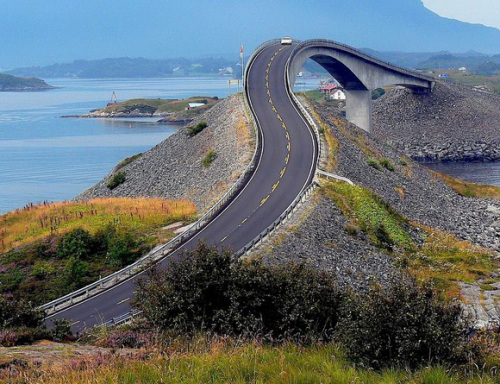 Here’s an experiment: The next time you go for a car ride, count the number of private roads you drive on. You may be surprised at how many private roads you drive on every day.
To many people, a private road seems like a fantasy, like some sort of futuristic invention out of the Jetsons.  Yet private roads have been around for most of America’s history.
It wasn’t until the 1830′s that the government began meddling in roads.  Before that, turnpikes, or toll roads, were the norm.  Even today, toll roads are a common sight in the US.  Yes, it’s kind of a hassle to stop and pay the fee, but with technology getting better, you don’t have to fumble with quarters anymore.  Today, drivers can whiz through toll booths without even slowing down, thanks to a little sticker on their dashboard.  Sometimes the fee is a couple bucks or less, and sometimes, during the off-peak hours, there’s no charge at all.
Ever been stuck in a traffic jam?  Toll roads help clear up traffic by encouraging people to think outside the box.   Some drivers will car pool.  Others will go around.   Still others might want to pay the extra cash to get in the fast lane and zip home early.  That helps to clear up the road for everyone else.
Still, it is annoying to think about paying all that money.  But just remember, we pay even more money to drive around right now, in taxes.  Gas taxes supposedly pay for our roads and bridges.  But if there was no gas tax, our average price at the pump in the US would be 50 cents per gallon cheaper!
Without government roads, some people exclaim that there would be no free roads.  However, there are private roads today that drivers don’t pay directly for.  Many malls around the US have whole systems of free private roads that surround their stores, sometimes with stop signs, traffic lights, and security, and nobody pays a toll.
Sometimes it’s just difficult to imagine a private company wanting to build a really long, thin thing, such as a road.  But just look at railroads.  Before the government got involved, many railroads were built privately, and they extend all over America, for thousands of miles.
Many private communities today build their own private roads, connecting each house to each other, and then finally connecting to the main road.  Is it such a stretch to imagine that the main road could be private too?
In a free-market system, many businesses wouldn’t even need to build new roads, because luckily, the roads in America are already built.  So privatizing the road system would be as simple as bidding off the infrastructure.  The government could actually make a fortune bidding off all it’s roads.  Maybe they could pay off some of the debt that way.
Of course, there are the usual arguments to this.  What if an evil, for profit business wanted to buy a road?
But let’s not forget that before 1984, many people simply couldn’t imagine greedy, for profit telephone companies taking over the phone systems.   It was simply unthinkable.  Yet, phones today look like they’ve come straight out of the space age, and they work better than ever.  Who knows how our roads might change?
Switching over to a private road system would certainly make things cheaper and faster, but most importantly, it would probably save lives.  Right now, more than 40,000 people die on the roadways every year.  The police do the best they can, but how many times have you seen someone run a red light and get away with it?  Under a private system, owners would have every incentive to make sure their drivers were safe.
It’s hard to think of all the creative ideas an entrepreneur might come up with.  Perhaps the safest roads would advertise their safety, and come up with ways to detect unsafe drivers early.  It’s hard to predict all the ins and outs of how an entire transportation system might work, but one thing is certain: private roads existed before governments ever got involved, and they will exist long after.