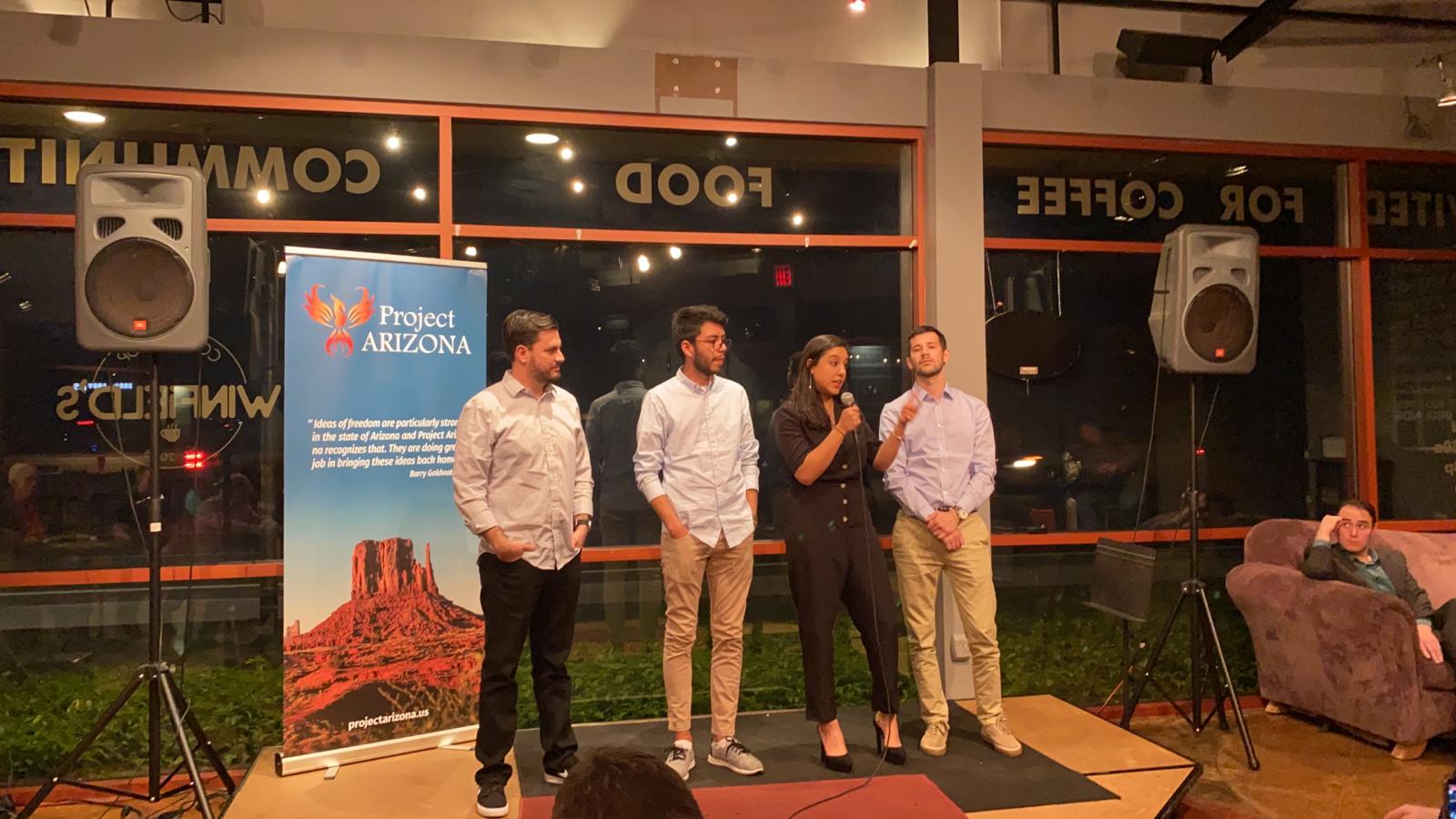 The 27th of January event “An Inside View: Poverty in South America” took place in Scottsdale, Arizona thanks to the initiative of Liberty International’s Project Arizona and ArizonaTalks. Speakers from Argentina, Bolivia and Ecuador, current students at Project Arizona, and Dr. Kyle Varner, Vice President for Latin American Programs at Liberty International, gave speeches showing the consequences that the government has when it tries to solve poverty or when it applies policies that are oriented to generate wealth.

Dr. Kyle Varner started the night talking about Why Latin American countries struggle with poverty and how he got involved with Venezuela as a doctor. While learning Spanish he used to listen to Hugo Chavez’s speeches. He soon realized that radical socialist ideas where only depriving people of being freer. The consequences that his ideas had over the years were notorious so Dr. Varner decided to help somehow. He volunteered for an NGO to work in the border between Venezuela and Colombia. The experiences he told about the precarious equipment and medicine they have to work with to give support to Venezuelans that are fleeing the country were devastating. Everything was caused because of the economic collapse that leads to poverty and it’s leading to death. The spread of socialist ideas through Cuba and the repercussion it had in Latin America are dangerous. The hope Dr. Kyle Varner sustains is that somehow people who advocate for freedom will have the rails of power because this is the only way to make an economy thrive and to overcome poverty.

The second speaker, Nicolas Zelada from Argentina, talked about populism being a killer of his country. What caught the attention of many in his talk is that Argentina was in the XIXth century one of the richest economies in the world because it applied free-market principles. Now it is struggling for not being the worst. The gradual expansion the government had throughout the years led to economic problems such as the devaluation of the Argentinian currency, making them lose their purchasing power. Taxation also is a big problem, and it’s strongly correlated with inflation.  Another issue Nicolas addressed was the growth of populism and how the state plays a paternalist role when people are in need, generating a strong dependence from the most vulnerable sectors. What Argentina is living now, is and will be an example of why socialism doesn’t work.

The evening continued with Estefania Sandoval who talked about how dollarization saved Ecuador from becoming Venezuela 2.0. Inflation in the late ’90s was very high making the local currency reach up to 25,000 sucres for 1 US Dollar. This was the reason why Ecuador incorporated US Dollar as their currency and made people skeptical about institutions afterward. What she continued to tell was, how politicians saw an opportunity to convince people that they would do better than the previous government. So, each time a new president was elected a new constitution was formulated. This did not an is not giving Ecuador the proper foundations so it develops itself more. As the current policies don’t seem to aim to advance freedom, the hope for a freer society continues in Ecuador.

Our last speaker, Pablo Garcia, focused on the causes of poverty in his native Bolivia. He pointed out that there are two determinants of why Bolivia is a poor country. The first being the geographical position and the second being the role the government plays in trying to solve the problem of poverty. Bolivia is located 4000 meters above the sea level making it really difficult to trade with other countries. This is why the cost of production and transportation are much higher than regular. Given this factor, what Bolivia does is focus on exporting only raw materials that come from mining or oil reservoirs. The government, therefore, knowing it is the only source of high income in Bolivia, heavily regulates it bringing the unintentional consequence of discouraging foreign investment. But what Pablo was hopeful about is that people in Bolivia still find ways to overcome poverty on their own through spontaneous orders, reflected in informal businesses that are making cities that were poor grow very fast. This without government intervention. The more freedom you give to people the wealthier the society will be.

It was an enjoyable night. All the people that attended this event learned a little bit more about what’s happening in South American countries and what are the real repercussions of socialist ideas when implemented. We hope to have more events like this so our students can share their experiences more. Follow Liberty International’s program Project Arizona via Facebook and subscribe to PA’s newsletter by sending an e-mail to [email protected]