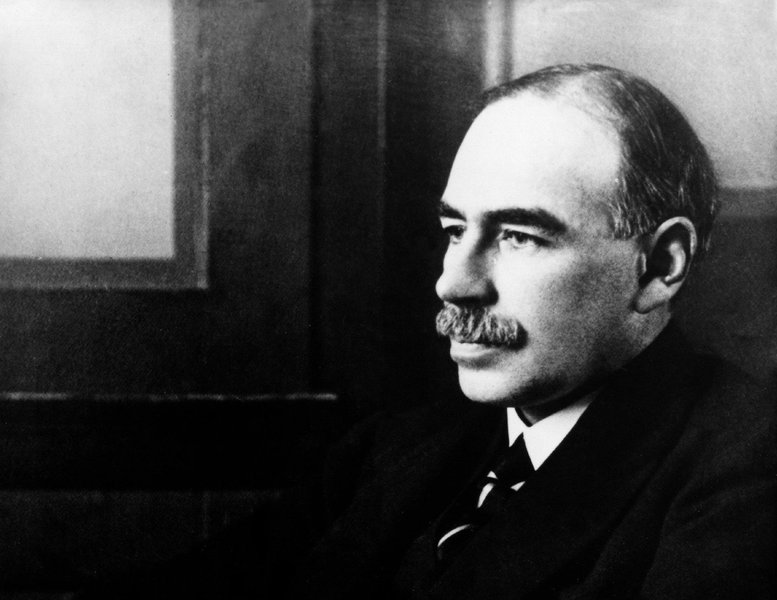 It will be, moreover, a great advantage of the order of events which I am advocating, that the euthanasia of the rentier, of the functionless investor, will be nothing sudden, merely a gradual but prolonged continuance of what we have seen recently in Great Britain, and will need no revolution.

These are the words of John Maynard Keynes in his 1936 General Theory. What Britain had “recently seen” at that time was the Great Depression.

Keynes uses the French word rentier as a smear word for the kind of person who Henry Hazlitt describes as “the terrible fellow who saves a little money and puts it in a savings bank. Or he buys a bond of United States Steel.” Hazlitt’s work The Failure of the New Economics is the best source you can get if you really want to understand Keynes.

While Keynes can borrow from the French language when it suits him, there is another French word you won’t find in his “General” Theory: the entrepreneur. Keynes sees the world in terms of macro-aggregates. In his model, ‘Capital’ is homogenous and whatever ‘amount’ of it exists in the present is taken as given; likewise for ‘Labor.’

In the Keynesian model there is no process across time (intertemporal) for calculating, choosing, and producing the specific forms of capital equipment that provide for the production of specific consumer-pleasing goods and services. If there is no diversity of capital goods, no structure of production, no future orientation and no choosing, then there is no need for the entrepreneur.

So when Keynes observes people in the real world that have no role in his imaginary model (eg entrepreneurs), he portrays them as a worthless drain on society and advocates policies aimed at eliminating them (and as President of the British Eugenics society eliminating undesirables was not confined to the economic sphere). Keynes again:

[T]he euthanasia of the rentier [would mean] the euthanasia of the cumulative oppressive power of the capitalist to exploit the scarcity value of capital. Interest today rewards no genuine sacrifice, any more than does the rent of land. The owner of capital can obtain interest because capital is scarce, just as the owner of land can obtain rent because land is scarce. But whilst there may be intrinsic reasons for the scarcity of land, there are no intrinsic reasons for the scarcity of capital…

Capital equipment means production goods—factories, planes, trucks, computers, screwdrivers, espresso machines, and so forth. Sometimes the word capital is used in a way that also includes the money that stands ready to purchase production goods.

If you take the latter, broader meaning, capital appears to be non-scarce, since fiat money can be expanded by central bankers at will. But the real tangible capital goods needed to produce real consumer goods and services obviously are scarce. You can’t produce those instantaneously by clicking a mouse. And the kinds of capital goods at our disposal clearly matter—would you prefer a typewriter factory or a microchip factory?

Having chosen the kind of capital goods you prefer, a process through time is required. During the time set aside to produce those capital goods, sacrifice is required—you must sacrifice the ability to consume in the present, in order to concentrate on producing machines that will produce consumer goods in the distant future.

Think of Robinson Crusoe shipwrecked on an island. He might dream of constructing a fort, a canoe, a fishing net, a wheat field, and many other long-term projects—capital projects. Before he can start those projects he first needs to construct an axe, a spade, and so on, in a long sequence of production. But those long-term projects take time, and he is hungry and thirsty and cold and exposed right now. Any efforts directed towards those long-term goals come at the expense of efforts to satisfy his immediate consumption needs. Contrary to Keynes’s assertion, capital is genuinely scarce, and does require genuine sacrifice.

In a more complex society like ours, we can benefit from the division of labor. This doesn’t overcome the scarcity of capital goods or the need to sacrifice present consumption in order to produce them. But it does mean that some people can voluntarily take on that sacrifice, allowing others to avoid it.

Most workers want to be paid right now, in advance of the finished goods being ready for sale, and regardless of whether they ever get sold profitably. In contrast, entrepreneurs are people who have saved resources that they are willing to not consume, but use them to pay workers, in the hope of future profits. This arrangement suits both parties according to their preferences. As John Stuart Mill in 1848 pointed out:

A person who buys commodities and consumes them himself, does no good to the labouring classes; and that it is only by what he abstains from consuming, and expends in direct payments to labourers in exchange for labour, that he benefits the labouring classes, or adds anything to the amount of their employment.

Entrepreneurs bear the market uncertainty, having confidence in their foresight, and direct resources into particular lines of business they anticipate a demand for.

But what if somebody has this entrepreneurial foresight but not the saved resources? This is precisely why there is interest.

Interest allows one person to do the saving and another person to access those saved funds and invest it into profitable lines of business. The rate of interest, when not manipulated by central bankers, is society’s way of putting a price on the sacrifice of waiting. As Mises explained in Human Action, this ‘originary interest’ can never be eliminated. An originary interest rate of zero would mean people are just as happy to be paid now or in a million years. But since we are all time-bound beings, such a situation is unimaginable in our world.

So what does it mean when a central banker says “we are lowering interest rates to zero?” The central bank has no magic lever to make people’s valuations of present vs future satisfaction turn neutral. But they can artificially manipulate the market rate of interest by standing ready to push as much additional money and credit into “the economy” (via their cronies of course) as necessary to satisfy the demand for borrowing at that rate. Since they can do this with newly created funds, there need not be any incentive for savers to satisfy that demand with saved funds. Borrowers can borrow what nobody has saved. The ‘rentier’ is ‘euthanazed.’

So what is the problem then? The problem is, Crusoe does not just want a ‘representation’ of capital equipment, he wants an actual canoe. Central banks can trick people into ‘spending’ on investment projects in the absence of real saved resources, but they cannot conjure up those real saved resources. Keynes knew this, but didn’t care:

Unemployment develops, that is to say, because people want the moon;—men cannot be employed when the object of desire (i.e. money) is something which cannot be produced and the demand for which cannot be readily choked off. There is no remedy but to persuade the public that green cheese is practically the same thing and to have a green cheese factory (i.e. a central bank) under public control”.

The theory embodied in this paragraph is that the public is irrational, that it can be easily gulled, and that the object of government is to be the chief party to the swindle.

But no matter how gullible the government thinks we are, or how crafty they are at swindling us, Keynes’s green cheese (i.e. printed up currency) is not the same thing as the real resources people demand and work hard for. The swindle leads to an artificially induced spending boom and subsequent bust, consuming and using up capital in the process.

Money is a claim on real resources, so printing it up transfers some of those claims to the receivers of that new money, at the expense of those who worked hard to accumulate them. As an astute social media commentator recently quipped: “you work your guts out all year for $30,000 and then a central banker clicks a mouse button and creates $2,000,000,000,000.” Each of those dollars clicked into existence without sacrifice carries the same purchasing power as the dollars you worked hard for. Why work hard?

And then, very late indeed, even simple people will discover that Keynes did not teach us how to perform the “miracle … of turning a stone into bread,” but the not at all miraculous procedure of eating the seed corn.

In a manipulated interest rate environment, instead of saving and accumulating resources, everybody wants to be on the receiving end of government and central bank largess, eating their neighbor’s seed corn, lest their neighbor eats it first.

In 2020, the world has entered into a government forced shut-down which will plunge economies into deep recession. The situation is made far worse by the decades of Keynesian economic policy that preceded it.

This supply side trigger has come at a time when interest rates had already been artificially pushed close to zero for a decade or more in many countries. In such an environment, only crazy people wanted to be savers, and everybody—households, businesses and governments—borrowed to the hilt while credit was cheap and plentiful. So the world entered this coronavirus shut-down with virtually no savings buffer, with firms and employees living paycheck-to-paycheck in a mountain of debt.

Such an economy has no resilience to any shock. Broke companies cannot make payroll, so broke tenants cannot pay the rent, and then broke landlords cannot make repayments, meaning broke banks cannot remain solvent, except for government bailouts—but what if governments are also broke?

Governments are trying to reassure voters that nobody will miss out on a bailout. Don’t worry, dear voter, the pain will be transferred somewhere else, not on you. But who is the someone else? There is nobody left to do the bailing. We entered the coronavirus shutdown in an economic situation where the rentier was already euthanazed and the seed corn had already been eaten.

The only mortgageable ‘asset’ that remains in society are the claims on future tax revenues by governments. But these claims have been sold off in millions of tiny slices (government bonds), and over-indebted governments are itching to sell off more and more. Who can buy all those bonds when nobody has any savings left?

The only thing left to do is for the government to pretend to buy their own bonds by printing up more and more money for themselves. But the more they take this seemingly easy road, the less motivating it is for anybody to actually work for a living. If people are not producing real goods and services for the government to buy, their fiat currency is worthless. Everybody gets a golden ticket, but there are no chocolate factories.

This is the world that Keynes wanted, and his central planning protégés have delivered it in spades.

Mark Hornshaw is a lecturer in Economics, Entrepreneurship and Management at The University of Notre Dame Australia.

This article was originally published on FEE.org. Read the original article.