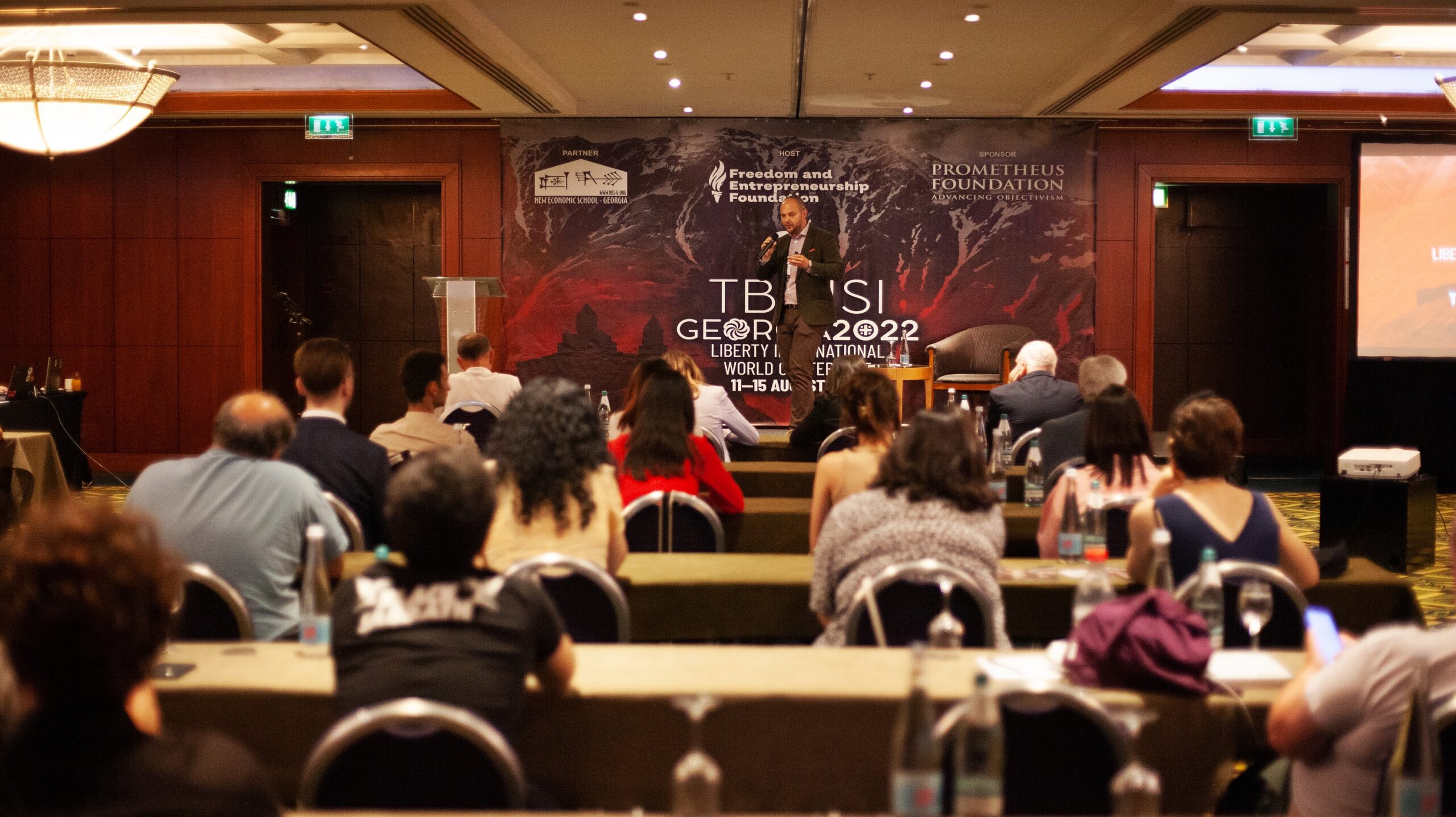 Liberty International World Conference 2022 took place on August 11-15th in Tbilisi, Georgia. Participants and speakers from all around the world gathered to kick off the conference that thrilled, touched and changed all of the participants’ lives. For several days we focused on the main theme which was How to Expand Freedom Throughout Your Lifetime & dived deep into thoughts and discussions about our goals, values and what drives us in life.

The event was opened by LI President, Jacek Spendel, sharing his experience as a libertarian and upcoming projects such as nurturing ideas through storytelling: a cartoon series based on the book “The Adventure of Jonathan Gullible; A Free Market Odyssey”, Online Seminars: Short webinars to provide a platform for discussion on contemporary issues from libertarian lens; A month- long training program Project Arizona, a three-month online program Libertarian Solutions, and a 5-day training in Liberty Camps. What else can we say… Liberty International’s team likes to keep themselves busy with all of the projects! 🙂

Mr. Glenn Cripe Founded the Language of the Liberty Institute in 2005 and has talked about the 5 -day seminar Liberty English camp (80+ programs) that was held in more than 34 countries with more than 3400 students. The participants at the camp learn classical liberal philosophy, free-market economics and entrepreneurship.

At the end of the first day, the stage was taken by the Kibbes with an interesting history about how art can influence the political mood. The mesmerizing story about Frank Zappa, an artist who wrote the words:  “I believe that people have a right to decide their own destinies; people own themselves. I also believe that, in a democracy, government exists because (and only so long as) individual citizens give it a “temporary license to exist’-in exchange for a promise that it will behave itself. In a democracy, you own the government – It doesn’t own you.” & “Communism doesn’t work because people like to own stuff”. They told us about the latest news from Cuba, especially how Cuban artists are trying to reach out to the world through music and art, and let the people know how the Cuban people are struggling under the Castro government.

Day 2 started with interesting stories from Professor Ken Schoolland, about embracing the freedom of refugees. How the political establishment made their citizens leave their own homes and became the migrants, they were able to restart life from ground zero. In the modern world we still face migration issues. He argued that every entrepreneur should be free to hire whoever they want, and shouldn’t be the priority for the entrepreneurs and the citizens. Not having a working or living permit should not be an issue. He strongly supports open borders for migrants.

Li Schoolland, who is a survivor of a communist China, told her harrowing story of how Chairman Mao’s government sought to replace God himself. In China a common practice was to drag people before the public to denounce, humiliate, physically abuse or even kill. To search people’s houses and confiscate or destroy possessions was another common practice,her little brother and she were forced to watch the Red Guards ransack their home and torch all photos, western style clothes and shoes, etc., then take away all valuables.

Rafael Badziag has reminded us that “ Our life is the most valuable portfolio of investment you will ever own” and to do what you can that works, don’t victimize yourself and chain yourself down.  He offered 7 Steps To Dare The impossible:
Step 1: Beliefs
Step 2: Goals
Step 3: Plan
Step 4: Action
Step 5: Grit
Step 6: Reaching The Goal
Step 7: Closing The Magic Loop

Later on, Rainer Zitelmann has offered 7 laws of financial success: 1. Education is far less important than most people think; 2. Sales talent is crucial; 3. Be a nonconformist; 4. Never blame other people or the world around you, for your failures or setbacks; 5. Focus is the secret of success; 6. You will never get rich if you can’t win the trust of others; 7. Persistence alone is no recipe for success.

Set yourself bigger goals! Take responsibility for your life and stop looking for the causes of setbacks in others, but in yourself! Have the courage to forge your own path and never be afraid to be different from everyone else!

Per Bylund has discussed the competitive advantage of the libertarians: The non-aggression axiom? – the ethics of peace and property. The outcome of a libertarian society? – The utilitarian promise. He also discussed the magical formula of entrepreneurship that is Value – Price – Cost.

The panel discussion “Is BIG TECH a Threat to Freedom?” Are we becoming more and more addicted to new technologies?

Day 3 started with an interesting presentation by Jose Cordeiro who discussed Liberty, Singularity and Immortality. The presentation was based on his life experience and the evolution of the technology, the peoples lifestyle-Amish, the Yanomami Indians; In 21st Century in the revolution of technology, world still have North Korea, absolutely closed country for the outsiders and rest of the world; main topic was the technology development and our attitude toward the future.

Hannes Gissurarson took us to the past to learn the history of the conservative liberal political traditions. He underlined main characteristics:
• To have and to be, efficiency and identity
• Not everything a matter of choice, also commitments, ties, loyalties by virtue of who we are
• Civil society: family, property, morality

Panel Discussion “Pros and Cons of living and growing business in Georgia” discussed the economic situation of Georgia after the Soviet Union, what main reforms were done by the government to make the Georgian economic system more western and why Georgia has become more attractive for foreign entrepreneurs.

At the Luncheon Thomas Walker–Werth discussed the right of choice and how the government is settling the law to control human behavior towards society & how the right of property is secured.

Angelica Walker–Werth discussed the importance of honesty, and how crucial it is to gain the trust of your surroundings if you want to be successful as an individual entrepreneur or simply a co-worker. “Lying is a cooperative act. A lie has no power whatsoever by its mere utterance. Its power emerges when someone else agrees to believe the lie.”

Jan Bertram who represented the Free Cities Foundation talked about Free Cities. They are cities with their own police forces and prisons, their own laws and tax systems. Libertarian islands, so to speak, within countries governed by a completely different state constitution. Relations between cities and their citizens should be governed exclusively on the basis of treaties. In the event of conflicts, these would be adjudicated by a third party – he cited international arbitration courts as a model. Bertram admitted, of course, that something like this would be difficult to imagine in countries like the United States or Europe today. There are, however, model projects that do not correspond completely with the ideal of free cities, but in some respects come close, such as the Dubai International Finance Center. There are two model projects in Honduras, but there is a danger that they will be abolished, because the socialists come to power in this country. Their upcoming conference which will take place in Prague, October 21-23, 2022 Cubex Center –Prague, this year they are expecting around 300 attendees on the theme “Parallel Structures for Progress”.

Georgia itself also has a libertarian movement, and its own libertarian party, Girchi – More Freedom which was represented at the conference by the professor of politics Zurab Japardize. He is popular among young Georgians and hated by many older voters. Mainly because he advocates the legalization of drugs and is a vocal supporter of LGBTQ rights. He also opposes universal conscription. At a time where 20% of the country is occupied by Russia, many people are afraid of another Russian attack in the wake of the war in Ukraine. He points out that he is in favor of strengthening the army and joining NATO, but considers universal conscription to be an unsuitable approach.

As a ploy to get around conscription, he has even founded his own “religion” and appointed 70,000 “priests,” who are exempt from conscription. Not all libertarians at the conference are supportive: One Georgian woman sharply attacks Zurab, saying that refusing military service objectively benefits only one person: Putin.

Day 4 started with Henry Song who discussed the dictatorship in North Korea, how human rights are violated by the government and people are struggling in poverty, their life is in frame and there are no signs of freedom.

Kenli Schoolland’s main message was: don’t feel like a victim of society and don’t wait for society to change, start with yourself. “When we want to reduce the power of the state, we have to strengthen the individual.” And, “It is not a good idea to bet all your freedom on political freedom.”

Discussion panel called War in Ukraine and the Struggle Against Libertarianism in Europe gace us a chance to hear from the Russian Libertarian who migrated to Georgia, whose party members were prisoned by the Putin regime. Everyone at the conference condemned Russia’s war of aggression. However, there were some US libertarians who opposed supporting Ukraine with weapons. Main idea was that Russia’s aggression should be ended. Main goal is and will always be freedom but not everyone was persuaded by the pacifist attitude in that case. The Polish panellist pointed out that at this point only Russia benefits from a pacifist stance.

Thomas Walker- Werth has proposed interesting arguments about freeing morality of self-interest. Being selfish and egocentric sometimes is good for your personal development. If something doesn’t supplement your interest you shouldn’t spend your time with no purpose.

Hear Out the Youth panel discussion involved young libertarians discussing the new libertarian trends both in real-life & online world. It was good to see the young generation developing and bringing fresh air to the liberty movement! 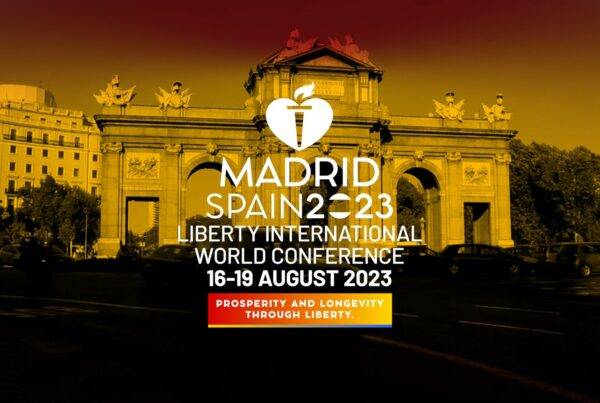