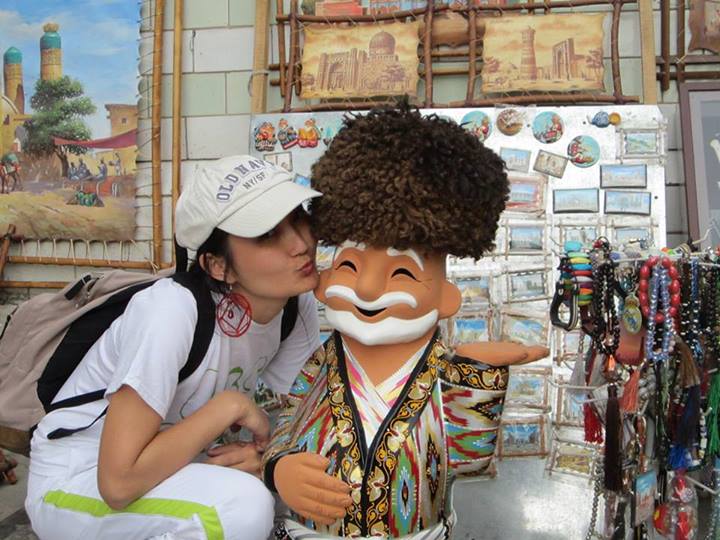 Uzbekistan: How I broke 3 laws in less than 24 hours

On the 27th of April my friend and I got on a bus in Bishkek to take us to Chymkent (a city in Kazakhstan, 10 min of drive from the Kazakh and Uzbek border) It was late in the evening so we were both really tired, and fell asleep quite quickly. When we woke up in the morning we were both really excited so very soon we started talking with other passengers. A couple of minutes later one of them asked where we were from, to which we replied that we were from Kyrgyzstan.
All of a sudden half of the passengers on the bus looked at us and said: “There is no way you are going to cross the Uzbek border! Kyrgyz citizens are not allowed to cross the border on foot.”
We were shocked, but all we could do was hope for the best.
A couple of hours later we arrived to Chymkent, took a taxi to get to the Kazakh-Uzbek border, which was crowded with lines of people eager to cross. We crossed the Kazakh border without issue and made our way to the Uzbek border where a soldier was awaiting us. As soon as we showed him our Kyrgyz passports he looked at us with a concern and he immediately called over another soldier.
Once the other soldier arrived he showed him our passports, and the other soldier looked at us with even more concern. He told us to go back, because there was no way for us to cross the border.
We tried to explain our situation to them and why we needed to cross the border. My friend had a TOEFL test scheduled in Tashkent for the next day, so she had a reasonable excuse. I had no official reason to cross the border, as I was going to promote my hostel business, but I just said that I was going for the TOEFL test as well. It was the only way I might have a chance at crossing.
Officially Kyrgyz citizens are allowed to enter the country by plane, but the tickets are 30 times more expensive than those for a bus, so it didn’t make sense to go by plane.
Thus began our 6-hour discussion with the soldier. We were forced to remain there for the whole time, without even having access to a restroom.
First, he passed our TOEFL registration papers to another soldier to show to their chief, and we waited for more than 2 hours for him to come back.
When he returned, he asked us once again about our reason for visiting Uzbekistan. We explained again. He went to his chief, and after another 2 hours he got back and asked us the same question, so we explained it to him again. Then once more he went away and came back again after 10-15 minutes to ask us the same question. Finally, I pleaded with the soldier to let my friend accompany the soldier to the chief and explain the situation.
After several minutes of hesitation he let my friend go with him. I sat there waiting for her for another hour or two, and just when I was about to lose hope, I saw my friend’s figure walking towards me. She looked at me and said: “They are allowing us to the cross the border. We can go!”
As tense as I was I had no energy to show how happy I was, so I just said: “Okay, let’s go.”

We waited for another half an hour or so in the line, and then at the last checkpoint before entering the territory of Uzbekistan came the customs officers.
They thoroughly scoured my backpack and one of the officers took out my laptop and started looking through my pictures and videos. He said he was making sure that there was no pornography or political content on it.
I was patiently waiting for him to finish when my friend came over, who had been behind me in the line. When they asked for her laptop, she declined saying that it was her private property. They said that either she let them examine it or she was to just go back home.
I was so terrified at the idea of having to head back that I quickly calmed her down and handed over her laptop to them. They couldn’t really use it because it was totally new and soon enough they gave it back to us.

Finally across the border, we found a bus to get to the town where our CouchSurfing host was waiting for us. CouchSurfing.com is a site that enables you to find people who are willing to host travelers for free in their homes, a fantastic service for less affluent travelers. That was our second illegal act in the country, as CouchSurfing is actually illegal since all tourists to Uzbekistan are required to register within 3 days of their arrival, and this can only be done in hotels.
Since we had no local money we first went to the black market to exchange the dollars into Uzbek Som, the local currency. The black market exchange rate was much better than at the bank, so even though it is illegal in UZ to exchange there we did it anyways.
Tashkent itself was beautiful and I even had the best ice cream I’ve ever had in my life! Nonetheless, when our trip came to an end and we crossed back over the border into Kyrgyzstan, I felt joy at returning to a place of liberty—the most important word in my dictionary—which was clearly missing in Uzbekistan.