February 2017
Ken: “How do we persuade people to embrace liberalism?” presentation and publication release of the Malaysian edition of The Adventures of Jonathan Gullible: A Free Market Odyssey, the 80th edition in more than 50 languages.
Li: “You plant the seeds, but do you watch them grow?”
Asia Liberty Forum, Mumbai, India (Li spoke again in 2018 at ALF in Jakarta)

Gathering at FreedomFest with supporters and members of Liberty International

May & September
Virtual Reading Group, 4 sessions weekly for two months, on “The Adventures of Jonathan Gullible: A Free Market Odyssey,” hosted by Ayemen Fatima (on right), Students for Liberty in India

I was invited to be the facilitator for this workshop, the final step of LIMS Leaders Academy in partnership with the Friedrich Naumann Foundation in Lebanon and Syria, a yearly intensive economic capacity building program, aiming to empower party representatives to draft market-oriented policy propositions for feasible solutions in Lebanon. My wife was invited to give the keynote address at the graduation banquet for the International Federation of Liberal Youth’s (IFLY) 42nd annual General Assembly.

December 16
The Friedrich Naumann Foundation of Lebanon and Syria hosted the Liberal Alphabet Series, E: EnterTraining Liberals with a presentation on the use of my book for economics training, now published in 50+ languages worldwide, including Arabic, French, and English for use in Lebanon.

2018 Highlights in March:
Li Schoolland with John Stossel on Reason TV from NYC:


Li Schoolland with Matt Kibbe on CRTV from Washington DC:

Li Schoolland, a survivor of communist China, tells her harrowing story of how Chairman Mao's government sought to replace God himself. 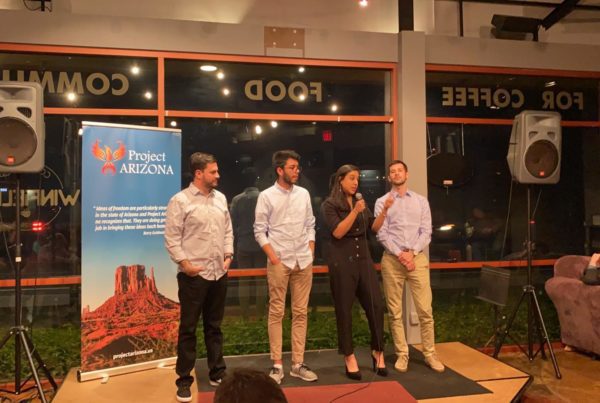