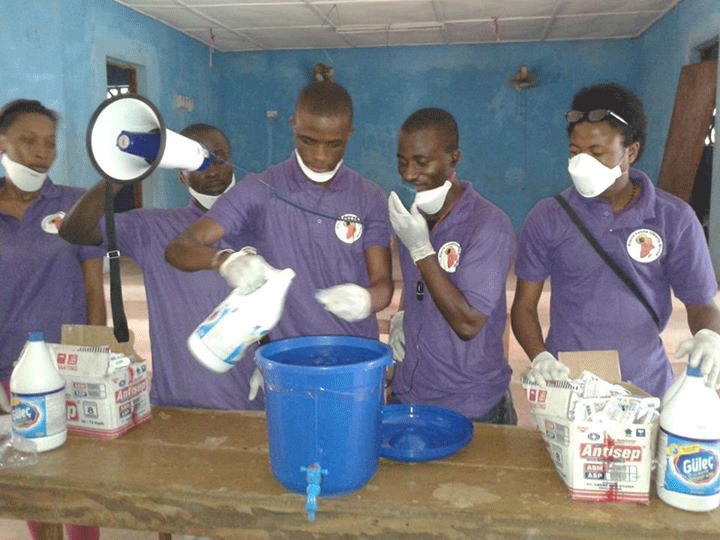 Ebola Tsunami in Sierra Leone: It doesn’t get any worse than this.

Meet Mustapha Cole of Sierra Leone. Four members of his family have just died of Ebola in the last couple weeks–his aunts, sister, and uncle. He buried three on October 5 and his uncle passed away just yesterday. His father, a sister, and one other relative remain with him in a small house that is short of food—very short of food. Everyone stays indoors as much as possible to avoid contact with others who may carry the Ebola virus—yet the pangs of hunger keep driving people to find nourishment that can make them strong enough to withstand illness.
One family of 8 ventured from their home in desperation, but the food they found was spoiled and all of them died of poisoning. Mustapha is now living in a village of 20,000 people who are in a panic because 100 die every day. It isn’t just Ebola, but now people are increasingly vulnerable to malaria and cholera as well. The dead have been left in homes for three or four days so far—people are too afraid to touch them.

This morning Mustapha found the body of Ibrahim, a truck pusher who earned $5 a day. He had been suffering for days from what he thought were cold symptoms and went to the hospital to be checked. He didn’t have enough money for treatment, but even if he did the remaining hospital staff were too afraid of Ebola to examine him. So many doctors and nurses have died that there are few left to look after the sick.
Mustapha reports that the government has lost all credibility. The government stopped paying the staff so they went on strike. “People are dying like flies in the country. Many citizens lost all hope and trust. They are afraid to go to the hospitals. They think that when they go to the hospital they will die. The Sierra Leone Liberty Group (SLLG) is pleading for help.”
The SLLG is a group of eight youth in the community who are scrounging for antibacterial soap, Chlorox, and buckets just to help people in the clinics to wash their hands to prevent the spread of disease. They also need quarantine materials and, most of all, food. “Food is my problem,” says Mustapha. “I only eat one time a day and never the correct food to keep up strength.”
Dan McLaughlin, a long time member of the International Society for Individual Liberty and supporter of the Youth Liberty and Entrepreneurship Camps in Ghana, is working with Mustapha. “Musta was interested in the things I had done in Ghana with the Youth Liberty and Entrepreneurship Camps and wanted to get something started in Sierra Leone. We were developing a program, but then Ebola hit and has made it doubly difficult. The focus now is on what can be done in the group’s name to help with the Ebola crisis, hopefully leveraging that for when the crisis is over and people can think about their futures again.”
Dan explained further, “Musta has had some difficult times and has lost all of his family, but he has a heart of gold and is really interested in promoting the ideas of liberty and entrepreneurship as the solution to the poverty problem. Funds are extremely limited for them. I really appreciate your interest in SLLG. Any help you can give would go a long way. There is a lot of potential for the group, but there are some difficult obstacles to overcome.”
It is difficult to fathom the desperate circumstances that Mustapha is facing: the tragic loss of so many close family members, isolation from the community, a shortage of food, a collapse of the medical system and local economy of food and basic necessities of life, and the shattering violence of police run-a-muck
“Police and soldiers,” declared Mustapha, “are now killing young citizens. People are suffering with out saying anything and when you do talk you will be killed secretly. Poor people don’t have a voice. People don’t know their rights as most rights have been taken from them. There is no hope for young people. No education for children as now no schooling is going on. Bribery is the order of the day.”
It is surreal. His father gave Mustafa use of his old computer and he still has intermittent use of electricity and internet. So I am tethered so delicately between my routine life in Hawaii and his scramble for an existence on the other side of the planet. No movie fiction could be more bizarre, yet so hopeful.

How to help? Contribute to the SLLG rescue fund through: